Skip to content
One of my clients contacted me because she was evacuated from her home due to the Bay Area fires and her cat Nibs wasn’t eating, drinking and only hiding, fully stressed.
“Everyone is safe thankfully, but it’s scary and awful and unbelievably stressful. And of course Nibs is incredibly stressed… probably more than me. So many foreign strange sounds for the poor guy (at the hotel), and he’s mostly been hiding. We arrived on Wednesday about 6 pm, and he’s barely had anything since then. I had fed him before we left, but he vomited it all back up which is very unusual for him. Then there was the 45 min drive to Santa Clara (he screamed the whole time and pooped and peed in the carrier). :(“
She contacted me asking if I could communicate with him ASAP. I started communicating with him at 12:42PM. He thought that something was after him and his mom either to hurt or kill them thinking that’s why she was so scared and why they left their home so quickly!
I quickly explained to him about the fires, so her mom leaving the home so quickly with him and driving to the hotel, was to keep them safe from the fire and nothing was after them to hurt or kill them. He was instantly so relieved, poor little guy.
And by 12:57PM she reported, not knowing I had already talked to him…
“He ate shortly before my last email at 12:57… interesting! And then I left to pick up some food and supplies. I took longer than expected and when I got back I couldn’t find Nibsie at first, but then he came out of hiding, and he’s been out and about and much more calm and more himself. It’s amazing! At the moment he’s sitting in the middle of the room calmly feeling confident and not hiding in the corner. He didn’t run when he heard loud people out in the hall. I just dared to pull up the shade, and he took a look out the window and it was no big deal. Earlier he was really freaked out at the sight of the large parking lot and cars and people, etc. He seems to have really improved tremendously since you talked to him.”
Nibs is Mr. Relaxed after our conversation, can you tell? This is one of his photos in the hotel room now. Nibs, you are so very handsome and sweet!

Have I said this before? I LOVE LOVE LOVE talking to animals!!!! ❤ 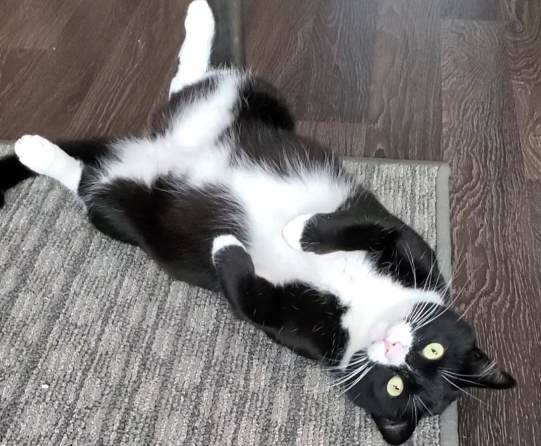 * I am an animal communicator (telepath) & intuitive healer. I have been blessed with a gift that enables me to communicate with the mind and hearts of animals. I’ve been doing animal communication professionally since the year 2000 and have an established track record of helping animals and their people. * How I received this blessing was from the worst moment in my life. My dog Corke was hit by a car on purpose by a man I was in a relationship with when I was out of town. Why? Because he did not like dogs and was jealous of how much I loved Corke. He left Corke in the cold, dark garage to slowly hemorrage to his death. It was the most painful thing I ever experienced. I couldn’t believe that one’s heart could hurt so much and still survive when I arrived home and had to bury him. I went on a quest to reach him. Our undying love for each other is what actually gave me the biggest blessing I could ever dream of - being able to communicate with animals. And in doing so, I vowed that I would help others be able to share with their beloved pets how much they fill our hearts and our lives. Also, to help people in their grief when they have had a pet pass on. I wanted to free people from the torment I lived until I was able to reach My Little Angel - Corke. * I am mostly clairaudient (hear their voice) and clairsentient (feel their emotions), but I do get clairvoyant (see images) information as well. So just as you and I would talk together, that’s how it is with your pet and me. You get to hear exactly what their response is to what you ask or tell them. * My training in healing touch has turned into the ability to do intuitive healing/energy balancing. I am able to see energy blockages and pain in animals without being in their presence. This healing technique has helped the animals I’ve worked with emotionally and physically. I’ll also recommend natural products that might help with various issues. View all posts by chatswithanimals

2 thoughts on “Overly Stressed Cat Not Eating Or Drinking & Won’t Come Out Of Hiding, After Being Evacuated From Fires In The Area”

Overly Stressed Cat Not Eating Or Drinking & Won’t Come Out Of Hiding, After Being Evacuated From Fires In The Area

I’m So Honored Pets Listen & Talk To Me!

Is There Any Natural Support For My Pet Who Has Seizures?

The Story Of Ellie: An Amazing Horse’s Sensitive Heart

Even If They Don’t Feel Like It, They Still Will Do It For Us

Are You Prepared To Save A Scared, Lost Or Injured Pet? Or, Give 1st Aid To Your Own Pet?

Do You Have A Good Mommy Too?

My Snickers Thinks He Got Away With Getting Into The Trash!